So much of life is hard work and stick-to-it-iveness predicated upon serendipity, chance or whim.  Think of the “Steves” in their garage building the first Apple Computer!  Recall someone standing at the dais saying, “Hey let’s start a Space Force” or men in a Tavern in 1775, drinking, that formed the United States Marine Corps???  Be it naivete or audacity so many great things have humble beginnings.  The American Service Knife is no different.  In March of 2016 while traveling with great friends on knife business in Europe we were “testing” German Beer in a pub talking about our industry and future projects…knife aspirations??  The ubiquitous plastic handled knives from Switzerland and their market of almost no competition came up in conversation.  It sparked so much creative excitement in me that I was drawing ideas within a week and in short order had arrived at an entirely new concept.  My friends were all busy with their own companies and projects so after sharing some preliminary sketches I told them I was going for it.  Everyone laughed because I think they knew I was just crazy enough to do it.

See ya on the trail,

My cart
Your cart is empty. 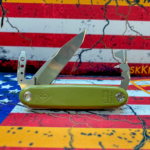 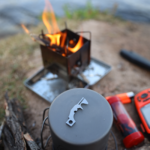